While the weather this week has probably not been out of the norm for late October in Iowa, the weather has given me reason to pause. Two days ago it was cool and rainy outside and I paused. Then I whined about not wanting to go outside (it was nearing time to get horse and mule chores done for the evening). My inner-voice whined as I looked for my rain pants and had indecision over what rain jacket to wear. Did I mention it was raining? What about the temps being not warm, did I mention that? That wind had a winter chill to it, a reminder that seasons are changing.

On with the rain pants, that pair is lined with Gore-Tex, I should be good to stay dry, right? My inner-voice was still whining about not wanting to go outside… It was cool, but not cold enough to put on winter boots; I slipped into neoprene rain boots instead. Ball cap, hooded sweatshirt or did I have on two sweatshirts, and then an anorak (zips on the side not front). Zipped the hood up, zipped the side down, on with warm gloves, and out I went.

The rain splattered my jacket, my pants, and my face. The rain was cold. Off to love on a couple horses and a mule. Standing there in their lot, that’s when I realized I was not walking the walk I had so earnestly talked at a recent training Becky E and I did for early care and education providers. Get outside! Be in the out-of-doors, no matter the weather! Here I was whining.

Remember, there’s no such thing as bad weather… only bad clothes. I remembered saying that at the training. 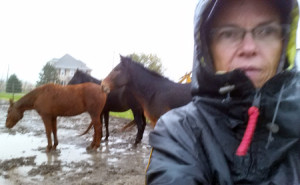 Equine chores done, cats and dogs fed, buildings closed up, and the mail fetched from the box. I peeled off my gloves – soaked through. I pulled off my anorak – soaked through – my shoulders were damp as the waterproofing was likely worn away (again). I unzipped the legs on my rain pants and noticed that the back of my jeans below the knee were damp.

At this point, I’m beginning to think my inner voice has a better memory than I do… maybe my inner voice knew I would get wet even with rain gear. Rain gear? How old are those rain pants? (…over twenty years old!) What about that anorak? (It was given to me over 15 years ago by someone who bought it second hand, no water repellency to the jacket without a spray-on after every washing.) Gloves… a never ending battle. Maybe it’s time to not have “bad” clothing?

An attitude change was (maybe is?) certainly in order as the weather is only going to stay cold and get colder. I think I also need to watch for a sale and replace some well-worn rain gear! I certainly cannot encourage providers to be outside with their children (remember how good unstructured free play in the green spaces is for all) in all sorts of weather if I’m going to sit in the house and whine!

Off to bundle to stay warm and go outside for some Vitamin Sunshine and Vitamin N(ature)! Have you gotten yours today?

Adapt this winter and snow-focused activities for your setting. These activities will help you get "Vitamin N" in your schedule. Check out this activity!

Bundle up and go explore the snow! Give children the opportunity to touch, explore and build things with snow. Make snow sculptures with snow, twigs, and leaves. Too cold to go outside? Bring the snow INSIDE! Use large tubs, totes or bowls and bring snow inside to play with and explore. Provide cups, spoons and other tools for exploration. Make mini snowmen or snow sculptures, provide nature objects to decorate your snowmen. Here is a fun link to snow songs: http://www.preschooleducation.com/swinter.shtml