I had never given the words ‘playground’ or ‘playspace’ much consideration for their differences until I was prepping for an outdoor training for early care and education providers about creative free-play in the outdoors, no matter the season.

I’ve read that ‘play is the work of childhood.’ Through play, children learn about themselves and the world around them, they practice and refine skills in all the developmental domains. Creative play in the outdoor environment has a special quality promotes frequency, duration, and quality, something that can’t be found in other environments. Where can you envision young children engaging in creative free play – on a playground or in a playspace?

Current research indicates that when children cannot be creative with the equipment on a playground, they have a tendency to push their own limits and boundaries by adding risk and challenge. This is particularly true with boys. Boys are often more rough-and-tumble in their play naturally. 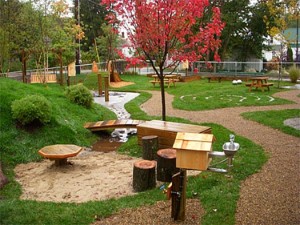 That same playground of my youth had very little green to it, at least what I remember. I seldom played on the equipment during recess (I usually got hurt when I did… slivers, bumps, scrapes… nothing serious), but I do remember sitting under the tall, tall trees along the street with friends and making up stories about the stick people in our hands.

Does the word ‘playspace’ conjure up different images in your mind? Does playspace help you imagine open space, green space, a place with random loose parts just waiting for creative young minds to begin a grand adventure? To me it does, whether that play space is in the budding of spring, the green of summer, the colors of fall or the white blanket of winter. All of them offer that chance for a grand adventure in ‘playspace.’

Look for future Musings about the outdoor playspace! In the meantime, find and read “Nature and Young Children: Encouraging Creative Play and Learning in Natural Environments” by Ruth Wilson.

Learn about groundhogs and how they survive the cold winter temps. Check out this activity!

February 2 is an annual tradition of checking in with a groundhog in Pennsylvania to determine how much winter was left! Learn more here!