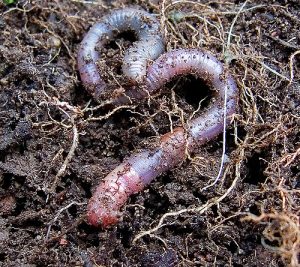 Explore the fascinating world of worms! “Earthworm” is a general term used to describe many different species of worms that live in the soil.  While they do not have an obvious head or tail you can identify the head by which way the worm crawls.  And did you know that worms absorb oxygen through their skin?  Explore the world of worms with young children with this activity!

For this activity dig worms from your backyard or schoolyard to bring into class.  If you are unable to find worms on your own purchase them from a local bait shop.  (Note: Worms that are purchased must not be released into the local environment.  Non-native worms can disrupt the local ecosystem.)

Place the worms in a container and cover with soil. Show children the container of soil that contains the worms (the worms will likely be hiding in the soil) and ask them what animal might eat this soil for lunch? After they have guessed dig into the soil so that they can see the worms.  Next put a damp paper towel in front of each child and place a worm on each paper towel.  Allow the children a chance to observe and touch the worms (remind them to use gentle touches).  Give them a chance to share their observations.  Questions to ask: How does the worm move? What color is it? What does its skin feel like? What does its skin look like? How does the worm move?

Take children outside to look for worms.  Bring small shovels or old spoons and allow the children to help dig.  Ask them where they think worms might live.  Dig there.  Try several places.  Questions to ask: Do you think worms prefer wet or dry soil? Why? Do you think they prefer shade or sun? Why? How deep in the soil do you think worms live?

For more information and for craft ideas use Growing Up WILD’s “Wiggling Worms” activity!

Kindernature.org has a wide variety of activities, songs, games and crafts about worms.