Children play a game of hide and seek to learn about important adaptations in many wild animals.

One adaptation that many animals have is some type of camouflage that helps them survive in their surroundings. The environment that an animal lives in is often the most important factor to what the camouflage looks like and how well it is used for them to survive.

Camouflage varies from animal to animal and depends greatly on the behaviors an animal has and how its body functions in their surroundings. An animal that spends a majority of its time in the woodlands is not going to have markings like a fish. Shape, dull colors, bright colors, patterns, false faces, false eyes are all things to look at closely. The type of camouflage tells a story of where they live and how well they get along in their surroundings through predator/prey relationships. 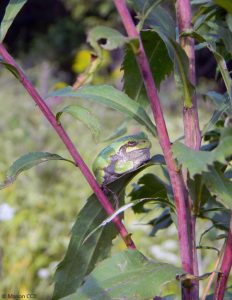 Use animal toys and hide two animals, one where it blends in and one where it stands out. Have children look for them. Which is easier to find? Why? Introduce the word camouflage and have the children come up with examples. Show examples of camouflage in nature using pictures or other visuals.

Go outside and play hide and seek using the toy animals (one for each child).  Choose a child to be the predator. The ‘predator’ sits with his or her eyes closed (‘sleeping’) in the center of the play space. The rest of the children are the ‘prey’ and hide their animal ‘in plain sight’ by hiding their animal where it will be camouflaged. The prey must be able to ‘see’ the predator and not be covered up; they are relying on their camouflage to hide from the predator! After the prey animals have been hidden, ‘wake’ the predator up. The predator then tries to spot any prey they can from where they are.

Which animals were the easiest to find? The most difficult? Why? Encourage children to discuss and make observations. Repeat the hide and seek game allowing each child a turn to be the predator.

Also try a version of freeze tag called ‘Freeze Birds.’ One child is the ‘hawk’ and the other children are the ‘bluebirds.’ The hawk turns his or her back to the bluebirds and counts to twenty. While the hawk counts, the bluebirds fly around together behind the hawk looking for food. When the hawk is finished counting they yell ‘Here comes the hawk!’ and the bluebirds warn each other by yelling ‘Freeze birds!’  The birds freeze and stay still. The hawk turns around and looks for movement, the first one to move becomes the next hawk! 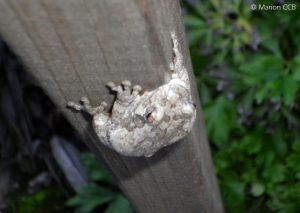 Create a ‘surprise terrarium’ to share. Place an animal in a terrarium that is camouflaged to the vegetation in the terrarium (for example a toad that blends into the grass and soil). Encourage children to observe the terrarium and describe what they see!

Take children on a nature walk to look for camouflaged animals. Draw pictures of what you see in your nature journals. Study the animal(s) that you found as a class, read books about it, make a class picture of it, or write a class storybook about it.