What does it mean? 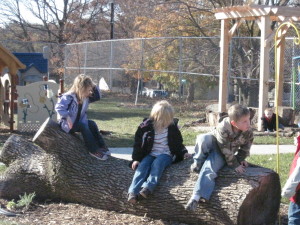 Psychologist Jean Piaget first described young children as having a unique set of physical, cognitive, social and emotional attributes that differentiates them from any other age group. He described the constructivist theory-that children construct knowledge out of their exploratory actions on the environment. This theory forms the basis of the modern interactive, hands-on approach to learning.

Why is it important?

Young children think differently than adults. Because of this, we have difficulty interpreting their actions, emotions and reactions. They have little concept of the past, present and future; they confuse reality with fantasy; they think that everyone feels, thinks and acts like they do. It is essential for us to understand not only how young children think but why they thin what they do and change our methods accordingly.

According to this concept, there are four stages of cognitive development.

Talk with your children about how we know it is winter and how do adapt. Use a Native American story to help talk about animals in winter. Check out this activity!

The Mitten by Jan Brett is a great story to introduce winter. When Nicki drops his white mitten in the snow, he goes on without realizing that it is missing. One by one, woodland animals find the mitten and crawl in; first a curious mole, then a rabbit, a badger and others, each one larger than the last. Finally, a big brown bear is followed in by a tiny brown mouse, and what happens next makes a wonderfully funny climax. You can find activities that go with the book on janbrett.com.